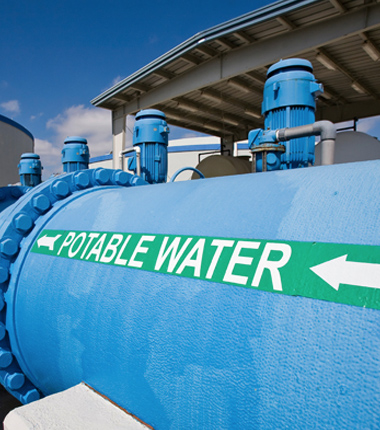 Potable water is water which is safe to drink for people in most stages of life.
It should contain no harmful concentrations of chemicals or pathogenic microorganisms, and ideally it should be aesthetically pleasing in regard to appearance, taste and odour.

Most of the world’s potable water is disinfected with chlorine, as it is well proven and it has a residual effect to maintain water quality from the reservoir to the consumer.

Traditionally chlorine gas or bulk hypochlorite has been used for this process, but new technology has allowed “On Site Generation” to be a viable alternative. The OxiMax MM and MA Series have many innovative features making them a logical choice a wide range of water treatment applications.
On Site Generation is safe, reliable and economic. In conjunction with our associate companies we have now installed hundreds of OxiMax machines throughout Australia and the world, including 15 at reservoirs around Sydney.
Operators of almost any water treatment system currently using chlorine gas (or bulk sodium hypochlorite) should consider the safety and economic benefits of an OxiMax On Site Generation system.
Over recent years, Chlorine Dioxide has been recognised as having significant benefits in the treatment of Potable Water and the introduction of our eChem equipment has allowed the on site production of Chlorine Dioxide safely and efficiently.

Great explorer of the truth, the master-builder of human happiness no one rejects, dislikes, or avoids pleasure itself, because it is pleasure,but because those who do not know how to pursue pleasureconsequences that are extremely painful. Mattew Stocks – Project Manager

Best Of Our service

The great explorer the truth who builder human happiness one.

Must explain to you how this mistaken of idea workers.

Denouncing pleasure, praising pain us born, it will give completed.

Dear Ken Varcoe, PERFORMANCE CERTIFICATE FOR OXIMAX ELECTROCHLORINATOR This is to certify that Gladstone Power Station has now run the 2 x 60 kg/hr OxiMax Electrochlorinators since 2002 with no maintenance problems. The equipment has performed reliably and has exceeded our requirements. Contracts Purchasing Officer - NRG Gladstone

Have a Questions? Call Us

Visit Our Company at

We are Working Between

Water Engineers and its associate company Anode Technology have been designing and manufacturing Electrochlorination equipment and coated titanium anodes for more than 25 years. We hold a number of patents and our water treatment equipment is well recognised throughout the world.

We don’t do spam and Your mail id is very confidential.
×